WE ALL HAVE ONE!

We all have one, a voice that expresses criticism or frustration, disapprove of our actions. It might sound like “what’s wrong with you”, “why can’t you get it together”, “that was stupid”, “they will find out you don’t know enough”.

At best these negative thoughts are just present like background noise, and at worst they might paralyze you, prevent you from a successful career, a healthy relationship and may even lead to depression. 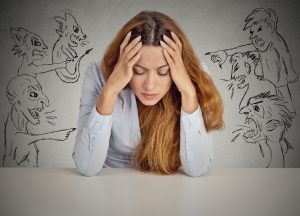 No matter how strong this voice seems, the act of noticing the voice begins the shift away from their impact on you. You cannot change what you are not aware of.

One way to become aware is to just sit with your thoughts and watch them. Imagine the thoughts being like water in a river, just flowing by you. The goal here is to notice, not to catch the thought.

In this step, just focus your awareness on the facts and messages of the voice. Don’t let your mind wander into the analysis of “why” you have this voice right now, and don’t allow yourself to argue with the voice. For now, just notice that you have a voice.

STEP 2: WHOSE VOICE IS THAT? END_OF_DOCUMENT_TOKEN_TO_BE_REPLACED

I used to call myself Moonbeam.  I was a real Flower Child.  When people asked me where I was from, I would say “The Universe.”

Now, I was on a significant spiritual journey, an honorable quest, to “let go of the ego” or perhaps even “annihilate the ego”.  And I discovered that there’s clearly some value in letting go of your ego at times.  But letting go of your ego can become like a dog chasing its tail.  I once had a teacher stop me dead in my tracks by asking me:

“And exactly who is it that is trying to annihilate the ego?”.

“Ooooh…I guess that would be my ego,” I had to admit sheepishly.

In Shadow Work®, we believe there are 4 main energies that make up a human being, one of which is responsible for sustaining your ego.  Scientists name these genetic pre-dispositions as Novelty-Seeking, Harm Avoidance, Dependence Persistence.   Everyone has some mix of these four genetic drives.  And your particular mix plays a big part in determining your unique personality.

Your genetic pre-disposition called Persistence has the special function of creating and maintaining your personal sense of self, your ego.

An unhealthy ego, on the other hand, leads to a shaky performance.   That’s why as Moonbeam I had trouble making money.  That’s why you wouldn’t want Moonbeam flying your plane.

A weak ego will cause you to belittle others, in order to temporarily boost your cardboard identity.  Or, in the other extreme, the weak ego with cause you to become a meek, indecisive wallflower who is afraid to take up space by speaking or acting with power.  Both of these weak egos are like a container with cracks and holes through which the energy to get things done simply leaks out onto the ground.

Here’s one of my favorite metaphors to illustrate the value of building a healthy ego.

Your ego is a lot like the earth, orbiting around the sun.  The earth has its own momentum which wants to break out of its orbit and follow its own straight path into the universe, never to return.   You get caught up in this perilous momentum when you feel separate from Spirit (or your Higher Self, or the Divine, or Source or whatever you want to call it).

When you get over-confident (or you start to see yourself as spiritually superior, or you believe you’ve got it all figured out) you are like a planet on a hubristic trajectory, heading directly away from the sun, and therefore away from the center of your own survival.  You probably call this “being selfish.”

When you are like a planet trying to speed off into infinity, you can, indeed, find some help in the teachings that recommend a dissolution of the ego.   Getting outside your own ego can offer some incredible life-altering gems.  Shifting your focus off yourself and towards something higher is an important step.

But you can overdo it.  Consider for a moment what would happen to the earth if it lost all of its own individual momentum.  Suppose the earth abandoned its own trajectory and surrendered completely to the pull of the sun.  The earth would fall into the sun.  It would absorbed completely by the sun.  And while the sun might become incrementally bigger, all the millions of species of life on earth would perish.

In a solar system where the sun is powerfully pulling everything in towards itself, the opposing force of the earth’s individual momentum is the only thing protecting life on earth.

Even though the sun and the earth are essentially one, (all matter is made of molecules that came from stars like the sun) there are millions of reasons to retain a sense of distinctness.  This distinctness allows us to experience a unique essence.

Like the earth in this story, our ego sometimes has a desire to go off on its own, in the opposite direction of Spirit.  But if our individual momentum can be balanced with the pulling force of Spirit, the self can orbit around Spirit in much the same way as the earth orbits around the sun.  This balance is the most fertile and productive formula yet to be discovered by science.  The human species alone has almost 8 billion unique expressions of Spirit, no two alike, but all manifestations of the same essence.  Each individual ego is a container capable of shaping Spirit into a never-before-seen art form.

Many mythologies present this miracle as the reason life was created, so that the one consciousness could experience its own depth and breadth through a full range of manifestations.

Like light refracting through a prism to disseminate the visible color spectrum, Spirit can refract itself thought your ego, which allows you to fulfill your purpose as one of the most complex and beautiful masterpieces of all.S

Heidi Loeppky is the founder of Shamaya Tantra and is currently training as a Shadow Work® facilitator. She is the co-creator of the Canadian Tantra Festival and offers regular Tantra workshops in her home base of Edmonton, Alberta. Her websites are ShamayaTantra.com and CanadaTantra.com.

This article originally appeared in our free email newsletter in February 2019. To subscribe, visit our subscription page.

Back to the Articles Index.

by Cliff and Alyce Barry –

The original version of this article was written when the house was for sale.

The cradle of Shadow Work® Seminars, Inc., is an Amish-built log house on 16 acres of woodland with a stream. Its great room is large enough for workshops, trainings, and other gatherings.

The house is the former home of Tim Barry (the brother of Shadow Work® founder Cliff Barry and newsletter editor Alyce Barry) and his wife, Terese Guiliani.

In 1993, Cliff had been running Accelerated Behavior Change (ABC) weekends for several years and was also a ManKind Project (MKP) leader.

While living in the log house, Cliff filed papers to make Shadow Work® Seminars a corporation, the first business milestone. Up to that point, he had been calling his model by several names, including Life Force Training. It was at this time that Cliff began using the name Shadow Work® and began the process of trade marking that name.

Cliff and his partner, Mary Ellen Whalen, began offering Shadow Work® facilitator trainings, and many of them were held in that house.

Cliff, Mary Ellen, and Tim were the first officers of the Shadow Work® corporation. Many of Shadow Work’s core business practices were formed there, and Cliff sees the impact of Wisconsin culture on the way the company does business.

“We had a sweat lodge out back,” Cliff remembers. “We did regular sweats, and I think that had a lot to do with the ethical business practices we developed. We formed some of our foundational principles there, both for the business and for Shadow Work itself.”

Cliff and his wife, Vicki Woodard, were married in the house, surrounded by friends and the Barry family, in 2005. Officiating was Mary Ellen Whalen, who is now a Sufi minister.

Lee Barry (another Barry brother) produced a lovely, personal video about the home, which undoubtedly helped Tim and Terese find a buyer.

Because Shadow Work® isn’t widely known, the video didn’t mention that the house is the company’s birthplace. But it’s true.

This article originally appeared in our free email newsletter. To subscribe, visit our subscription page.

Cliff Barry grew up in Glenview, Illinois, a northern suburb of Chicago, where his family was part of a religious community, The General Church of the New Jerusalem, or “New Church,” based on the writings of scientist and mystic Emmanuel Swedenborg.

END_OF_DOCUMENT_TOKEN_TO_BE_REPLACED

Shadow Work® is a personal growth methodology designed to help us understand and balance aspects of our own natures. END_OF_DOCUMENT_TOKEN_TO_BE_REPLACED

I read the first Harry Potter book while stuck in an airport several years ago, and I was dismayed at how quickly I became an addict. END_OF_DOCUMENT_TOKEN_TO_BE_REPLACED