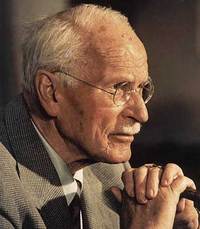 Carl Gustav Jung (1875-1961) was a Swiss psychiatrist who changed the way we think about the human psyche, or personality.

Jung coined terms that are increasingly common in today’s language. He described people as introverts and extroverts in their dominant approach to the world. One way we like to think about the difference between the two is that they get their inner batteries charged in different places, either by being alone (introverts) or by being with others (extroverts).

Jung used the word persona to describe the mask each of us wears in the world to hide our deep self. His term individuation refers to the process of becoming fully conscious, that is, the process of integrating our unconscious vitalities into our conscious lives. Jung’s work on personality types and dream interpretation have helped millions to understand themselves, their inner landscapes and mythic connections.

Jung thought of himself primarily as a scientist, and his ideas helped prove the existence and influence of the human unconscious. The lie detector and the Meyers-Briggs Type Indicator® (a widely-used personality test) are based on his ideas. Today, many consider him also a spiritual thinker who offered Western culture a way back to religion that places no shame on being human. The son of a pastor, Jung broke with his friend and colleague Sigmund Freud over what Jung saw as the fundamental human need for belief in something greater than ourselves.

Of Jung’s many influential discoveries, perhaps most central to us in Shadow Work® are:

The archetypes who inhabit the collective unconscious, a deep dwelling-place of energies accessible to every human soul regardless of circumstances. These include the four archetypal energies that form the foundation of the Shadow Work® Four-Quarter Model: Magician, Sovereign, Lover, and Warrior. While Jung named other archetypes, we believe the others are different names for, or combinations of, these basic four.

The shadow, the hidden side of the human psyche. As Jung wrote in his autobiography, “[I] had to try to gain power over [my fantasies]; for I realized that if I did not do so, I ran the risk of their gaining power over me.” Although many people use the word “shadow” to refer only to the darker parts of our nature, it contains also the golden selves that we find it too risky to see or to allow ourselves to manifest.

Jung’s emphasis on healing through experience. Unlike traditional cognitive therapy, which relies on dialogue with a therapist, Shadow Work® is experiential, meaning that it involves stepping into parts of the self in order to experience the energies hidden there.

Jung’s belief that healers must work with their own shadows in order to be in integrity and to help others effectively. For this reason, Shadow Work® facilitators and coaches are required to continue their own growth work in order to maintain their certification.